An investment of 26.5 million US dollars ALERT® software will be used to help organize the Minas Gerais emergency care network, including patient referrals within the state-based network.

Minas Gerais State is about as large as France with a population of approximately 20 million inhabitants.

Marcus Pestana, M.D., the Secretary of State for Health, stated that "this is a strategic project for Minas Gerais, since a centralized solution will provide the opportunity to monitor what is going on in our emergency care network. Through the Manchester Triage Protocol, patients will be treated according to clinical priority rather than patient arrival time. Furthermore, this classification makes it possible to refer patients to the closest healthcare unit where their health condition can be treated and managed."

The signed contract is valid until 2010 and represents an investment of approximately 26.5 million US dollars in ALERT® solutions.

Cesar Guimaraes, ALERT's COO, was present at the formal signing ceremony, and declared that "the onset of our operations in the Brazilian market has a very special meaning. Portugal and Brazil are true brotherly countries."

According to the head of the Brazilian subsidiary company, Luiz Marcos Brescia, "the contract signed by the Minas Gerais Secretary of State for Health represents a sound opening for our company and gives us the chance to operate in the Brazilian market". 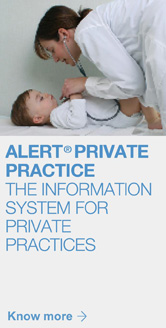